From April 1969 he served with the USAF’s 434th Tactical Fighter Squadron at George Air Force Base in California, where he trained fighter pilots on the Phantom prior to their assignments to Vietnam.

After a period in the RAF’s personnel directorate he was promoted to wing commander, and in November 1974 he assumed command of the Phantom-equipped 17 Squadron based on the Dutch / German border. In addition to operating in the fighter ground attack role, the aircraft was also tasked in SACEUR’s (Supreme Allied Commander Europe) nuclear strike plan, with one aircraft and crew holding a 15-minute readiness state. When 17 Squadron replaced its Phantoms with the Jaguar, Stear returned to the UK to take command of 56 Squadron, flying the Phantom in the air defence role. In December 1976 he was appointed the personal staff officer to the Chief of the Air Staff. For most of the next two years he served Air Chief Marshal Sir Michael Beetham, a demanding master.

Beetham appreciated Stear’s hard work and advice and offered him command of a Phantom base or the opportunity to fly the Harrier. He was attracted by the challenge of flying the RAF’s “jump jet” 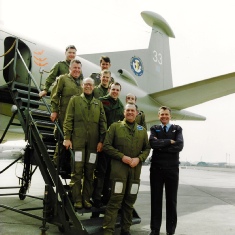 and, after a period of refresher flying, in March 1980 he assumed command of RAF Gütersloh in West Germany, the home of two Harrier and two helicopter squadrons. During his two-year appointment he also flew as first pilot on the Wessex and Puma helicopters. As the Harrier Force Commander he deployed to remote dispersed sites to provide close support for the Army’s operations in the forward area. At the end of his tour he was appointed CBE.

After a period at HQ Strike Command, in August 1985 he became the Air Officer Commanding No 11 (Fighter) Group. During his period of office the new air defence variant of the Tornado began to replace the ageing Phantoms. After a two-year period in the MoD Central Staffs he took over No 18 Group.

In 1993, on promotion to Air Chief Marshal, he became the Deputy Commander-in-Chief, Allied Forces Central Europe, with his headquarters at Brunssum in Holland. When told his favourite aircraft, the Hunter, was due to make its last flight in RAF service, he flew to Lossiemouth, and later in the day, with the squadron leader as his co-pilot, he flew the aircraft at low level to Scampton, where he made the last landing by an RAF Hunter.

He retired from the Air Force in October 1996, having been appointed KCB in 1990.