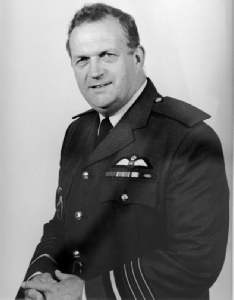 Air Chief Marshal Sir Michael Stear, who has died aged 81, was a Cold War fighter pilot who served on squadrons in the United Kingdom, Middle East and Germany before assuming senior RAF and Nato command appointments.

In October 1989 he was promoted to Air Marshal to be the Air Officer Commanding No 18 (Maritime) Group, with additional NATO responsibilities in the Eastern Atlantic and English Channel. His headquarters at Northwood were co-located with the Commander-in-Chief Fleet. This was a very different operational environment for him, within which the mainstay of his force was five squadrons of Nimrod maritime patrol and anti-submarine aircraft.

He immediately set about discovering the intricacies of the role, including piloting the four-engine Nimrod, and proved to be an excellent AOC who had a good and easy rapport with all ranks in the Nimrod force. With his fast-jet background he paid particular attention to his Buccaneer strike/attack squadrons based at Lossiemouth. He converted to the aircraft and continued to fly it on exercises when time permitted.

After Saddam Hussein’s invasion of Kuwait in August 1990 three of his Nimrods were deployed to Seeb in Oman to conduct patrols in the Persian Gulf, and they continued to operate throughout the conflict. Stear believed his Buccaneers, with their unique low-level laser target-marking capability, should be deployed to the operational area. In preparation he instructed the squadrons to devise medium-level tactics as a contingency plan. In the event, soon after the conflict broke out, six aircraft were deployed to Bahrain, where they provided critical support for the Tornado bomber force. When the force, by then up to 12 aircraft, returned on March 17, he flew to Lossiemouth to welcome them back.

Michael James Douglas Stear was born in Southampton on October 11 1938. He was educated at Monkton Combe School. In August 1957 he began his National Service in the RAF, serving in Hong Kong as a junior technician. He went up to Emmanuel College, Cambridge, where he read Oriental Languages, joined the University Air Squadron and started training as a pilot.

On graduation he joined the RAF as a regular officer. After training as a fighter pilot he joined No 1 Squadron based in East Anglia to fly Hunters in the fighter ground-attack role. After two years he left for the Middle East to be the weapons leader of 208 Squadron based in Bahrain. He co-ordinated the development of various low-level tactics including skip bombing from 50 feet and dive attacks with a more advanced rockets. His work was recognised by the award of a Queen’s Commendation for Valuable Service in the Air.