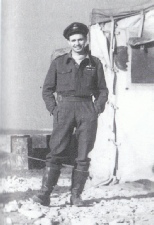 Donald Perrens, who has died aged 101, was one of the last Army officers to escape from France in June 1940. He then joined the RAF and flew Spitfires in North Africa and Italy and was twice decorated for his gallantry.

A very experienced tactical reconnaissance pilot, Perrens was posted to No 208 Squadron at short notice in late 1944 to replace the second-in-command, who had been wounded. The squadron was based near Florence and was providing support for a US Army artillery battery that had been equipped with a new eight-inch gun with a range of some 15 miles. Perrens visited the Battery to discuss tactics for a shoot against a large enemy ammunition dump 15 miles behind the front line near Bologna. He and his No 2 took off in their Spitfires and climbed to 10,000 feet to conduct the shoot. He soon identified the ammunition dump and an 88-mm anti-aircraft battery just to the north. After two shells had been fired and corrected by Perrens, the German battery realised the circling Spitfires were controlling the incoming artillery and the two pilots came under intense fire from the deadly flak, which forced them to climb higher to continue registering the fall of shot and relay appropriate corrections.

After 12 rounds the dump received a direct hit and was destroyed. At this stage Perrens could have returned, but he asked if the US Battery would engage the enemy anti-aircraft guns that had been menacing him. His Spitfire was repeatedly hit by anti-aircraft fire but he remained over the target for almost an hour to direct the artillery fire. He was forced to turn away when the engine of his Spitfire failed through the loss of fuel. Perrens glided back to the Allies forward defence lines with his No 2. Unable to release the hood of his Spitfire, he was committed to a forced landing in the rugged terrain of the foothills of the Apennines. He headed for a clear road and managed to land in an adjacent field but his Spitfire ran into a stone wall obscured by snow. He was badly injured, sustaining a compression fracture of his spine and multiple lacerations. He was rescued and taken to a field hospital, where he remained for two months. He was awarded an immediate DSO for “his coolness and courage”.

Donald Frank Perrens was born on New Year’s Day 1919 and educated at Bablake School, Coventry, and St Catharine’s College, Cambridge, where he read Physics. He was accepted for a post at Eastbourne College but the outbreak of war intervened. He was commissioned into a Territorial Battalion of the Suffolk Regiment, which left for France in March 1940 to join the British Expeditionary Force. Involved in heavy fighting, his company was cut off near Rouen but they managed to escape