The Gulf War began with an extensive air bombing campaign in the early hours of 17 January 1991. RAF Tornados, dropping the JP233 airfield denial weapon, were at the forefront of the attacks suffering a number of casualties. Once it was apparent that the Iraqi Air Force was effectively grounded, the Tornados commenced bombing from medium level with Second World War vintage, unguided 1000lb bombs.

On 22 January 1991, the Air Officer Commanding and the RAF

Lossiemouth Station Commander, Group Captain Ford, flew to RAF St Mawgan to visit the Squadron, where the AOC confirmed that there was still no requirement for the Buccaneers - although he favoured their use. Within a few hours the situation changed dramatically and later that evening, Lossiemouth was ordered to prepare six aircraft to deploy to the Gulf to provide laser marking support for the Tornado squadrons. With his experience of the Pave Spike role and of Buccaneer operations, OC 208 Squadron was appointed to lead the detachment with eighty per cent of the personnel drawn from the Squadron.

The next three days were frenetic with both 12 and 208 squadrons returning immediately from their detachments. Twelve aircraft had to be modified with IFF Mode 4, Have Quick II secure radios, new chaff and flare dispensers, and a complete respray into 'Gulf Pink' war livery. 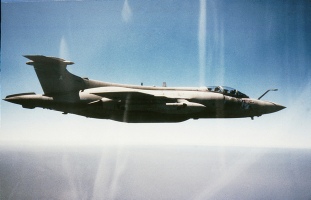 left at 0400 hours on 26 January on their nine-hour flight to Muharraq in Bahrain. Some crews plus 230 ground crew had already left by Hercules. The Station had generated the aircraft in just 3 days, including the recovery from Gibraltar and St Mawgan, which was a tremendous achievement by the entire Station complement.

So, after thirty years of continuous service, one of the most outstanding low-level bombers was finally going to war - at high level! When asked why such an old aircraft was being sent to the Gulf, the Secretary of State for Defence was quoted as saying:

'Because we need to improve the standard of precision bombing.'