During May 1940 the peacetime atmosphere in the Canal Zone began to change. There was a gradual increase in the implementation of security measures and on the 16th the squadron was ordered to standby and aircraft were dispersed outside the airfield boundary and mobile patrols were mounted. On 1 June, the squadron, less one flight, moved to its war station at Qasaba, near Mersa Matruh, where it came under the control of the 7th Armoured Division.

Within days the squadron was ordered to concentrate at Qasaba and all the ground party had arrived by the 10th, the day Italy declared war. Four aircraft moved forward to Sidi Barrani, close to the Libyan border and daily tactical reconnaissance (Tac R) and photographic sorties were flown along the border monitoring movements on the large Italian airfield at Fort Capuzzo with the aim of identifying any build up of enemy troops. The increased activity of Italian Fiat CR.42 fighters emphasised the problems faced by lone reconnaissance aircraft when the crew were intent on observing ground activity and had little time to check the threat from air attack. The need for a fighter escort soo 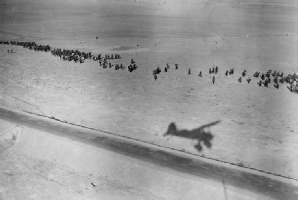 n became obvious. The value of an escort was reinforced on 4 July when Flying Officer Webber, with Aircraftman Goddard as his gunner, was ordered to carry out a Tac R south of Sidi Barrani. Two Gladiators of 33 Squadron provided an escort and during the sortie the Gladiators shot down two CR.42s as they tried to attack the Lysander. Webber was able to complete his sortie and return with valuable information.

The absolute priority for the squadron’s aircraft was Tac R but, with guns and a limited bombing capability, the aircraft was able to supplement 7th Armoured Division’s other limited attack assets. It was agreed that the squadron should have one aircraft on standby ready to carry out a close support sortie. The first opportunity to use this capability occurred on the 23rd when Flying Officer R. Aldis, with Sergeant McCue, took off to bomb a reported column of enemy transports at Aziez. He located the target and dived from 5,000 feet dropping his eight 20-lb bombs and eight 25-lb incendiary bombs amongst the vehicles. This was the first time the squadron had carried out a bombing operation.

The routine of daily Tac R and photographic flights continued throughout August and into September as the tempo of war began to rise. With France no longer in the war, and the United Kingdom embroiled in fighting for its survival during the Battle of Britain, the Italian commander-in-chief, Marshal R. Graziani, prepared to go on the offensive in North Africa.

During the first weeks of September, every Tac R sortie identified a build up of Italian forces on the Egyptian border. On the 9th the Italian 10th Army began a limited offensive along the coastal road. Italian Air Force air activity increased significantly and on the 13th, the Italians opened a big artillery barrage on Musaid before occupying the area.