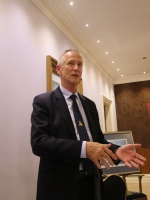 The Chairman introduced himself as Dave Trembaczowski-Ryder, and said that he didn't understand why he was known simply as 'T-R' during his time on the Squadron. After all, Trembaczowski-Ryder is quite easy to say and to spell. He welcomed everyone to the 2019 Reunion Dinner, particularly those who had not attended for some time, and thanked the staff of the Grimscote Manor Hotel for an excellent meal.

He updated those present that the Association now had 352 members on the database, all of which had received the 2019 Annual Newsletter. He thanked Malcolm Ward for another outstanding publication, and asked all present to forward anecdotes and articles to Malcolm for the 2020 Edition. He then introduced Neil Meadows, the Association Webmaster, to say a few words about the Website.

Neil explained the aim of the Website, which was to keep the spirit of the Squadron alive with a record of events involving Association members, such as Wing Commander Donald Perrens' 100th Birthday in January 2019. This had been celebrated i 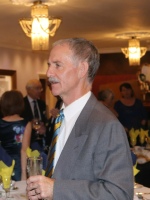 n the nursing home in which Wing Commander Perrens is resident; Ben Laite had represented the Association and officers from RAF Swanwick also attended to recognise the achievement of his 100 years, and his wartime achievements as a Spitfire pilot on the Squadron in the Italian Campaign in 1945. Notable anniversaries were also included on the Website, such as the loss of 4 Spitfires to the Israelis in 1949, and the 25th Anniversary of the end of the 'Buccaneera' in 1994.

However, the majority of the articles contained in the 'Chapters' section of the Website were stories and anecdotes provided by ex-Squadron members themselves. In that way, the spirit and humour of the Squadron would be kept alive in

perpetuity. The Website currently comprised 983 pages, and it was anticipated that the '1000 Page' target would be reached soon. Neil therefore urged all present, not only to take a good look at the Website, but also to provide articles and anecdotes, both to him and Malcolm, so that they could be recorded for posterity.

The Chairman continued by explaining that the Association traditionally held its Reunion Dinner in the RAF Club. However, as a result of a survey conducted amongst the membership, the decision had been taken to hold the 2019 Reunion Dinner in the Midlands: within the nucleus of the general population of the membership. Everyone agreed that it had been an excellent event, but the question was raised of where to hold future events, and in what format.