My Memories of WWII, by Geoff Smith

My first memory of WWII is of listening to the Prime Minister – Mr Neville Chamberlain - announcing the declaration of War with Germany and wondering what was going to happen next.  My father, who survived the trauma of trench warfare in WWI, was shaken by the realisation that it was only a mere 21 years since the end of WWI.

In 1941 I was employed as a junior engineer at a BBC radio transmitting station near Huddersfield.  I remember walking back to my lodgings late one evening when the sound of approaching German bombers was heard.  Very soon I could hear the whistle of falling bombs, and wondered where they would land!  Fortunately they exploded harmlessly in a field some 30 0 yards away.  We found out later that Liverpool had been badly bombed that night.

Having been keen on flying ever since my first flight 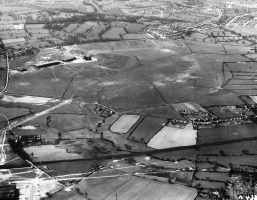 in an old 1920’s biplane back in 1931, I joined the Royal Air Force in 1943 to start aircrew training.  To my delight I was selected for training as a pilot and vividly remember my first solo in an old Tiger Moth at what is now Birmingham Airport, then known as RAF Station Elmdon.

The next stage was a four week voyage to South Africa in a large troopship named the Monarch of Bermuda.  We boarded her at Gourock on the river Clyde and our ultimate destination was Durban.  We were packed in the mess decks like sardines!  The winter weather in the North Atlantic Ocean is not pleasant and I was soon very seasick – along with very many others!  I ate nothing for a whole week and eventually realised that eating was in fact the cure for seasickness and I was OK from then on.  The crews on the escorting Royal Navy corvettes and destroyers must have had a rough time, because we could see them being almost submerged in sea water as they ploughed into massive bow waves caused by gale force winds. 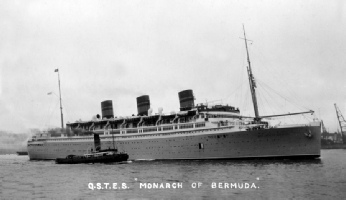 After we had called at Gibraltar, the weather was good for the rest of the trip.  Of course, our main worry was the threat of a U-Boat attack and I worried about how we would get out of a packed mess deck below the water line, in the event of being hit by a German torpedo!

The flying training in the Transvaal was thrilling and exciting and took place in more or less continually glorious weather. The training schools lay at an altitude of some 5,000 feet, so it was never too hot.  After our passing-out parade……