A decorated Spitfire pilot and rally driver from Exmouth has died aged 92.

John Pascoe-Watson, who received the Air Force Cross, was born and bred in Exmouth. He left to join the Royal Air Force, but returned to his home town to retire. He lived in Foxholes, overlooking Exmouth beach, which he regarded as the finest view he had ever seen. Mr Pascoe-Watson died peacefully on Friday, July 26 after a short spell in Royal Devon and Exeter hospital. He was with his family.

He was widowed 15 years ago after his ex-nurse wife Margaret passed away.

Both had been prominent members of Exmouth's Madeira Bowls Club, where he served as competition secretary.

Mr Pascoe-Watson was born in 1927 and in his early years lived with his two sisters on Shelly Beach. He was head boy of Exmouth Grammar School and joined the town's Sea Cadets. But flying was his real love and he joined the RAF via Cambridge University Air Squadron in 1945. He flew 26 different aircraft types during his career starting with Tiger Moths and ending with the fast jet Buccaneer.

But it was his Spitfire days 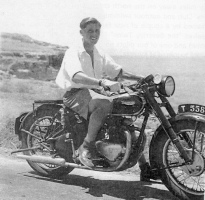 which formed the focus of his hair-raising flying memoirs, Laughter-Silvered Wings. In it he documented the last time an RAF plane was shot down in air-to-air combat - involving his own 208 Squadron in the Middle East in 1949.

Mr Pascoe-Watson went on to become a test pilot for the defence giant Ferranti in Edinburgh. In the mid-1950s, Mr Pascoe-Watson rallied with former Formula One British world champion Jim Clark, acting as Clark's navigator and friend.

In Scotland, John and Margaret brought up their two sons David, now a family doctor, and George, a communications consultant and former Sun political editor. They have four grandchildren. The couple retired to Foxholes Hill in 1993. Mr Pascoe-Watson volunteered for 11 years as a teaching assistant at Marpool Primary School. He was a founder member of the Exmouth Community Association and treasurer for six years. He volunteered as a cataloguer of Exmouth Museum for 13 years, and notched up 10 years as chairman of Foxholes Residents.