Hurricanes during the desert war in North Africa and from bases in Italy against targets in the Adriatic and Yugoslavia.

He joined 6 Squadron in late 1943.  It was equipped with a later model of the Hurricane modified to carry rockets in place of two of its cannons.  The squadron had gained fame during the desert campaign as a “tank-busting” squadron but its new role was to be anti-shipping operations.  Early in 1944 it moved to southern Italy.

Nicoll flew his first operation with 6 Squadron on April 5 1944 when he attacked targets in Corfu harbour.  Over the next few weeks, he attacked armed schooners, barges and ferries carrying supplies to coastal areas.  On May 3, his leader’s aircraft was hit by flak during an attack on a schooner.  He was eventually forced to baled out and Nicoll, who had escorted him, searched the sea area for him, but in vain.   Desperately short of fuel, Nicoll made a forced landing on the 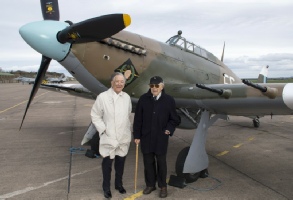 rudimentary forward airstrip on the island of Vis off the Croatian coast.   Refuelling from jerry cans, he returned to his squadron the following day.

Targets in Albania and along the Dalmation coast were attacked with rockets but the primary objective was to destroy the enemy’s re-supply vessels.  Nicoll attacked patrol boats and on May 23 his rockets blew a hole in the side of a 5,000-ton cargo ship, which caught fire.

By the end of May, Nicoll was flying many of his sorties from Vis, which allowed the Hurricanes and their Spitfire escorts to cover most of the Adriatic.  Many vessels were hit so the enemy shipping started to sail at night.  Nicoll led attacks against them flying at very low level and firing his rockets in level flight.

In August, the squadron’s commanding officer was shot down resulting in Nicoll’s promotion to be a flight commander.  He led many sorties from Vis and others from Brindisi.  By early October he had completed 55 operations, many against fierce anti-aircraft fire, and he had witnessed the loss of several pilots flying in his formations.  He was awarded the DFC for his “courage and devotion to duty”.