The following is a brief story, about my father’s life and career. The words are mostly his, and are taken from his life’s story, which was written with a volunteer in 2018/2019. As a family we are delighted to have this history to hold onto. He would be humbled to think that it was posted (in part) for others to read.

Although being a pilot didn’t define him as a man, it was a huge part of who he was. Of all his endeavours, his proudest was being in the RAF and part of the 208. The annual reunion was always in his calendar. Once in Australia, my father had a personal registration plate for his car, ST208. The two great loves in his life, my mother and the squadron. My son now has that plate on his car. My parents’ marriage was a love affair that lasted 64 years until my mother passed away in 2016. My father missed her every day.

The Sky’s The Limit

I was born in Jamaica on Sunday 14 March 1926, the youngest of four children. When I was aged 7 I would make paper aeroplanes that were powered by elastic bands! This was the beginning of my 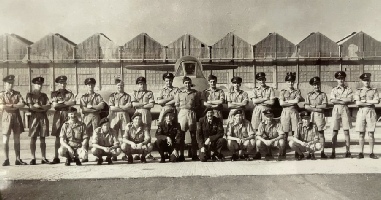 In 1944, at 18 years of age, an Optometrist told me that my eyesight was never going to be good enough for me to become a Pilot. Fortunately, I chose to believe otherwise. With the support of William, my father, I returned to Canada (where I had been educated) to volunteer in the RCAF. I passed the eye test! After six months training, the war ended and I was demobilised, and sent back to Jamaica. Undeterred, I then made my way to the UK to volunteer in the RAF.

In February 1946 the RAF accepted my enrolment and undertook my training. It did not mean that I would automatically become a pilot. It was merely the first, small step of many, whereby the RAF would provide pilot training. At the end of each training phase I would be assessed and if my performance was satisfactory, would proceed to the next phase, until the final step which would qualify me as an RAF pilot.