Taff Taylor was the Boss, a somewhat remote figure to us JPs, but we knew him to be fair, so we realized something was really wrong, and even worse when Cloughie was sent for by Buck Ryan, OC Strike Wing. Les Foskett, the Station Commander, was, like his predecessor Twinkle Storey, keen on dealing with all the misdemeanours by his Hunter pilots at Station level, as he'd presumably been young once, and possibly an irresponsible flying officer. We knew things were out of his hands when he called for a summary of evidence, and no one was surprised by the subsequent announcement of a court martial.

It turned out that not long after Cloughie had left the Mess on his bike, he'd approached 4 or 5 men walking in the same direction as he was riding. As they were on his side of the road, he thought he'd show them that they should have been on the other side, facing oncoming traffic instead of with their backs to it. His way of doing this was to drive past fairly close to them, to give them what he called a slight fright.

He'd not long left the security barrier, and with all the power of a Honda 50 he wasn't going very quickly, so the walkers had plenty of time to hear him coming, and realize he was going to pass close to them. One of them thought he'd encourage the driver not to come too close, so he stuck his arm out. Luckily, all that happened was that Cloughie had a bit of a thump in the chest, but being Cloughie he decided, in his words, that he should let the walkers know that this wasn't a sensible thing to do.

"Explain" is what he said he was planning to do.

I should mention that Cloughie was 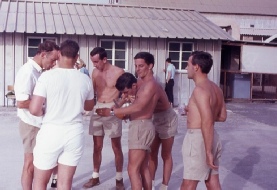 a burly fellow, and tough. I remember him as well over 6 feet tall, solidly built like a rugby player or heavyweight boxer, the sort of person you'd bounce off if you ran into him.

The road in this area was a public one, with a high fence to the domestic part of the Station on one side, and a high fence to the airfield on the other. The next thing we know from the evidence at the court martial is that John Houghton, the recce flight commander on 8 Squadron, the other Hunter squadron at Muharraq, had just set off from the Mess to drive home to Manama with his wife, and came across Cloughie having what was obviously a row with 4 or 5 men in a recess by a locked vehicle gate in the fence. He did the sensible thing and defused things, then once all was calm, he said:

"Yeah, ok John, I'll do that, thanks," replied Cloughie.