Leigh was the consummate professional who, although endowed with a good deal of natural flying skill, succeeded because of his commitment to excellence.  He achieved as much as he achieved because of his determination and tenacity: qualities that we hold extremely dear in our trainee pilots and which are often the key to success on this highly demanding course.

Leigh was honoured in the United States in many ways, including  a posthumous award of the Meritorious Service Medal.  His last Squadron, the 445th, named their conference room in his memory.  The first T-38 off the production line with his avionics upgrade was also emblazoned in his honour.  Until April 2003, however, he had no memorial in this country and in this Service.

In honour of her son, and our fallen comrade, his mother Mrs Fleur Fox therefore commissioned this silver trophy, to be presented at the end of the Tactical Weapons Phase of each course to the student who has shown the most improvement over both phases of fast jet training at Royal Air Force Valley and therefore, irrespective of the final course placings, has achieved the most.  The trophy was presented for the first time by Mrs Fox herself at a Ladies’ Guest Night at Royal Air Force Valley on 25 April 2003 to Flight Lieutenant Glyn Gogerty of TW6 Course. 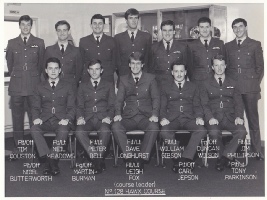