Flight Lieutenant Leigh Fox was born in Epping on 4 January 1962.  He attended Davenant Foundation Grammar School and, in 1979, he was one of only 30 students in Britain selected to receive a Royal Air Force Flying Scholarship, which led to him attaining his Private Pilots’ License at the age of 17.  Leigh was awarded a Royal Air Force University Cadetship at Southampton University, where he became an active member of the University Air Squadron, gaining some 125 hours on the Bulldog.  He graduated in 1983 with an Honours Degree in Physics.

Following his flying training, Leigh was selected as a first-tourist flying instructor on the Jet Provost at Cranwell.  After becoming a Deputy Flight Commander at No 3 Flying Training School, he was posted to the Tornado F3.  Excelling as an air defence pilot, Leigh became a Squadron Instructor, Instrument Rating Examiner and Standardizer.  He was then selected to attend the French Test Pilot Course at Epner, and graduated to an excellent standard, showing great potential.  His first assignment was to Boscombe Down, where he became the Tornado F3 and Trainers Project Test Pilot for Fixed Wing Squadron.  He was selected for an exchange tour in 1996 and arrived at Edwards Air Force Base to begin a 3-year tour as an F-15 Test Pilot.  He qualified on all models of the F-15 Eagle and T-38 Talon and was selected as the lead propulsion test pilot, executing numerous elevated risk tests on 3 different F-15 engines.  He was also the Project Manager for the T-38 Avionics Upgrade Programme and led a major redesign of the cockpit instrumentation.

On 22 October 1997, Leigh was flying a T-38 in an exercise that involved a B1 bomber and a F-16 fighter.  The F-16 pilot thought he  saw a flock of birds and made an emergency break.  During that manoeuvre, his left wingtip and missile rail collided with the T-38’s cockpit, killing Leigh and his passenger instantly. 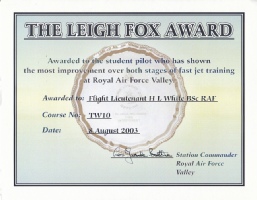