The Association is indebted to Rob Pinnell for his research into the life and service of Flight Lieutenant (later Lieutenant Colonel) Robert Leith-Macgregor DFC MC, who served with 208 Squadron in the North African Campaign in 1942.

Robert Leith-Macgregor (yes it actually was double-barrelled) was the stepson of an Admiral and attended Pangbourne college with the aim of becoming a naval officer (note Pangbourne college wore the naval uniform). Robert struggled with the high level of mathematics and transferred from Pangbourne to Sandhurst, from which he commissioned into the Northumberland Fusiliers in 1938. He served in Belgium in 1939 but became bored with soldiering and volunteered to be trained as an army volunteer pilot.

After gaining his wings, he was posted to 241 Squadron before moving to 208 Squadron and earning the Distinguished Flying Cross (DFC). His service with 208 Squadron in 1942 is described below in extracts from Graham Pitchfork's seminal history of 208 Squadron, 'Forever Vigilant':

When Rommel's advance in North Africa 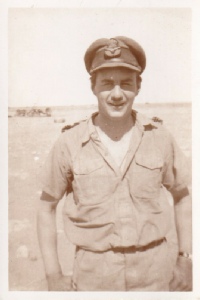 came to a halt in early 1942, 208 Squadron continued to maintain operations from dispersed landing grounds which, when there was sufficient cloud cover to escape, the Luftwaffe occasionally sent a small force of JU88s to bomb. On 5 February 1943, Flying Officer R L MacGregor intercepted a formation of five JU88s, which immediately broke formation. One of the enemy aircraft dived away and jettisoned its bombs. MacGregor closed on the others and made three attacks, damaging one of them before they escaped into cloud.

On 16 February 1942, MacGregor was flying an unescorted Tac R sortie when BF109s attacked him near Mechili. He managed to evade, but was intercepted again later in the sortie. The aircraft's glycol tank was damaged and he had to force land in the desert and walk back to Acroma where the Squadron was on the point of departure to a landing ground at Bir el Regal.

On 24 February, when carrying out a Tac R over Tmimi, he met intense anti-aircraft fire and his glycol tank was again punctured. He made another forced landing near Gazala where he was picked up by a South African armoured car and returned to El Adem.

Rommel began his advance to the Gazala line on 26 May 1942 and 208 Squadron pilots reported a heavy build up of armour and transports in an area fifteen miles south-west of Tobruk, which became known, colloquially, as 'Knightsbridge'. On 8th June, enemy activity increased.