First of all I would like to thank you for asking me to be the first person to speak about my era on the Squadron, particularly Italy. I was a farmer’s son and after the war a farmer and countryman of the Cotswolds and not used to speaking to such eminent company. On checking my log book I find that 60 years ago today I was doing a vertical photo recce near Bologna, with heavy Ack Ack – it is almost as daunting here this evening!

I completed training and

Squadron in late summer 1943. The Squadron was based at Rayak in Syria. The airfield was a French base and had been used by the Vichy French. One flight was detached to Kirkuk (2) in Iraq to guard vital oil supplies. We were equipped with Hurricane IIB’s, which were much superior to the Hurricane I’s we flew at the OTU (3) & (4). The first day was like being a new boy at a large school – the pilots appeared like prefects and many were veterans of the Desert Campaign. I was assigned to “A” Flight and was met by my Flight Commander Peter Perry whose exploits have been recorded in Graham Pitchforks book “

The Men Behind the Medals”. Peter and I became good friends and we used to meet several times a year until his death 2 years ago; I represented the Squadron at his 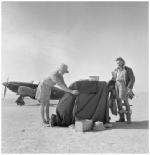 Our time there was spent training – tactical recce or Tac R’s with the Army Photo Reconnaissance (5), both vertical and oblique, air-to-ground firing etc. In November 1943 the Squadron was moved to El Bassa, just inside the Palestine border with Syria. A much smaller airfield with nissen huts for accommodation – a change from Rayak, which had hangars – here aircraft were open to all the elements.