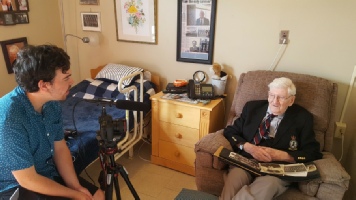 with reminders of his time fighting off Germans during the Second World War. On the far wall, decorative plates embellished with paintings of Spitfire planes. A small model of a Spitfire rests on the TV stand. On display in the kitchen are a few empty bottles of Spitfire Ale.

Lawrence is one of the few living Royal Air Force (RAF) Spitfire pilots from the Second World War. The youngest of five siblings (all deceased), he turns 90 on April 9.

“I grew up in England. My accent hasn't changed much,” the veteran laughs. A soft-spoken man with bright blue eyes, his recollection of the war is remarkably clear – requiring only the odd prompt from his daughter and son-in-law, Margaret and Marc Couse.

After the war he came to Canada and settled in Sault Ste. Marie. Thirteen years ago, he moved to Sudbury to be closer to Margaret, Marc and his two grandchildren. 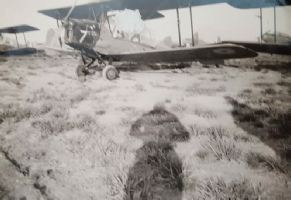 was old enough, he signed on to join the war effort. “As soon as I was 18 (in 1942), I joined the RAF and I trained as a pilot. Eventually I served in 208 Squadron in the RAF. I was flying Spitfires ... in Italy against the Germans. “There were four of us who all went to school together. We all signed up together. I am the only survivor. They all trained as pilots and they didn't survive. I was the only one.”

The RAF was instrumental in preventing the Germans from capturing Britain in 1940's Battle of Britain, arguably one of the most well-known battles of the war. It's the air force – and this battle – Winston Churchill refers to when he said “never was so much owed by so many to so few.” Gaining control of the English Channel was crucial to invading Britain. To get control the Germans first had to command the airspace. Between August and September 1940, they pulled out all the stops, pitting their 2,500 serviceable planes against the RAF's fleet of 660.