On 6 December 2001, RAF Valley completed its 60th Anniversary celebrations with a dinner night attended by the Prince of Wales.

The Prince, who is the honorary Air Commodore of the base, enjoyed a relaxed evening among personnel and managed to speak to almost all of the attending officers and guests.

And he was also on hand to present trophies to two of the base's best pilots as part of his night's work.

In his address to guests, Group 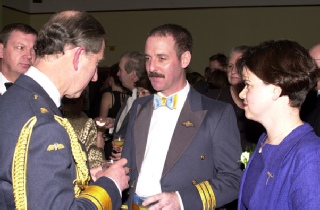 Captain Brian Newby, RAF Valley's Station Commander, reflected on the history of the North Wales base and drew parallels with activities of 60 years ago.

On that day, flying was delayed by rain and strong winds, eventually beginning at lunchtime. After a weather check, the aircrews managed 27 sorties including air tests, formation flying, sector reconnaissance, aerobatics and circuits. 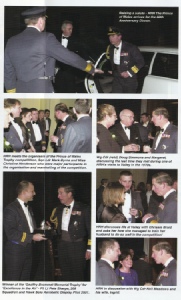 Another factor that remains constant is the standard of tuition that the pilots receive said Group Captain Newby. Instilling the ethos and qualities needed on the front-line is the job of the instructors whose highest standards of airmanship, teaching skills and officer qualities are an example to their students.

Group Captain Newby also spoke about other significant anniversaries of the year: the 80th Anniversary of No 4 Flying Training School and the 25th Anniversary of Hawk operations at RAF Valley.

The trophies were then awarded, including the Prince of Wales' Trophy to the pilot who scores highest in a tactical navigation and reconnaissance competition. The Competition began in 1981 at RAF Brawdy before moving to Valley when Brawdy closed nine years ago.