With the Second World War over the campaign for a “Jewish state” gathered momentum. The five years for Jewish immigration stipulated in the 1939 British White Paper were up, and immigration to Palestine was now

illegal. It was in this environment that 208 Squadron found itself at Petah Tiqva in October 1945. In view of the grave political situation, attempts were made to tighten up all aspects of security. The flying task consisted mainly of training and co-operating with the Army and Police ground forces in many exercises. Squadron aircraft were maintained at 30 minutes readiness and the state of emergency which existed put a keen edge on Squadron efficiency.

Throughout November 1945, acts of sabotage and rioting in Tel Aviv predominated as a result of further political upsets. At the request of the Police and 6th Airborne Division many tactical reconnaissance sorties were carried out to report movements of traffic and bodies of people and to report on the effectiveness of road blocks and curfews. December found the Squadron assisting the Police 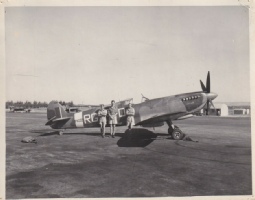 and Military in their searches of Jewish settlements for terrorists; also Air Headquarters, Levant, requested that the Squadron search for small caiques attempting to land illegal immigrants. Thus 1945 ended in a fluctuating state of emergency while the thoughts of Squadron personnel were turned to home and “demob”. Those members of the Squadron still remaining who had served throughout the War were anxious to see their families and homes again. Airmen were being posted home far more rapidly than their replacements were arriving and the Squadron was placed in the parlous state of having to combine with 32 Squadron and share the groundcrew in order to keep a minimum number of aircraft serviceable to meet their commitments.

This unfortunate state of affairs continued into the early months of 1946, while Jewish terrorists continued to cause trouble. Rising tensions resulted in RAF units in the region being brought to a state of maximum defence readiness on 17 January 1946, with 208 Squadron maintaining two aircraft at thirty-minutes' readiness. Officers and airmen carried revolvers.