ctical reconnaissance (Tac R) sorties in support of XIII Corps, but losses were high with fourteen pilots, including the Squadron Commander, Wing Commander J.K. Rogers, failing to return. Two had been taken prisoner. 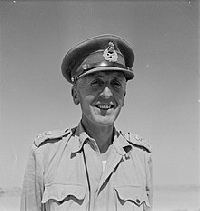 Lieutenant General Sir Bernard Montgomery issued his plans on 14 September for Operation Lightfoot to be launched during the October moon period. Lieutenant General B.G. Horrocks, the dynamic GOC of XIII Corps, visited the squadron and briefed the pilots on the ground situation and future plans. The unique relationship that existed between the Eighth Army and the Desert Air Force (DAF) extended down to unit level where army liaison officers (ALO) served on the squadron. As the Eighth Army prepared to

launch its attack, squadron HQ was established at Wadi Natrun (LG 202) with one flight operating from Burg-el-Arab.

The squadron was in constant demand to provide reports on enemy movements and build-up of forces. On 19 September, over 700 motor transports were found together with tanks and fifty artillery pieces. The following day a further 800 transports were observed. As the time for the commencement of the Battle of El Alamein approached, these reconnaissance flights became crucially important and fighters 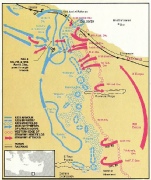 of 243 Wing, in addition to a weaver supplied by 40 Squadron SAAF, accompanied each Tac R and photographic reconnaissance sortie.