By 1922, 208 Squadron had been based at Ismailia in Egypt for two years, with little to disturb the normal routine of life of gunnery exercises, message dropping and photography, almost all in support of the army. Then, in the late summer a deepening crisis in Turkey developed. Turkish nationalists under Mustapha Kemal Bey (later more generally known as Kemal Ataturk) were unhappy about the loss of territory in the Smyrna district and in eastern Thrace to Greece under the Treaty of Sèvres of 1920. They expelled the Greeks from Smyrna by force in August 1922 and threatened to cross the Dardanelles. The sudden appearance of Kemal’s force on the borders of the strips of land on either side of the Gallipoli Straits, which had been declared neutral in the Sèvres treaty, created immediate tensions in European capitals. Britain feared for the security of the Straits and the Prime Minister, Lloyd George, supported by Churchill, decided to reinforce the British positions in Chanak, and, if necessary, go to war with Turkey to prevent the possible advance on Constantinople by the nationalists. There was no appetite amongst Britain’s allies for a further conflict, but Lloyd George decided to press ahead without their support.

On 16 September, HQ Middle East in Cairo received orders to send a small headquarters staff, a stores park and a Bristol Fighter squadron to the Constantinople area. Squadron Leader A. ap. Ellis, 208’s squadron commander, was summoned to a conference where he was ordered to prepare a headquarters and two flights of aircraft to support the British Army of Occupation, Constantinople. The following day, four aircraft were flown to Aboukir and dismantled ready for shipping to Turkey. Within a week, the remaining aircraft were prepared and the packing of squadron stores was completed ready for loading onto railway trucks at Moascar Siding. Orders came to delay this by twenty-four hours in order to add the squadron’s third flight. On the 25th the whole squadron arrived at Alexandria Docks at 0600 hours and, after breakfast, the AOC, Air Vice-Marshal Sir Edward Ellington KCB, CMG inspected the squadron.

The shipping available in Egyptian waters at short notice was limited and, in view of the urgency, the SS Podesta, a very badly equipped ship, was taken over by the RAF to transport the squadron to Turkey. 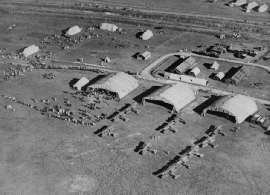 The whole of the day and following night was taken up loading the stores, vehicles and aircraft.  Also on board were six Snipe aircraft of 56 Squadron. The ship finally sailed early the following morning. The Podesta passed Chanak and the carrier Argus lying at anchor there before arriving at Constantinople at 0800 hours on the 30th. Some of the squadron and most of the Snipes were transferred to trains and moved to San Stefano in Eastern Thrace. Despite the slow speed of disembarkation from Podesta, due in part to lack of facilities such as cranes, the aircraft were erected at record speed and two of the squadron’s Bristol Fighters and three Snipes were airborne within two days of arrival at San Stefano.