Following pre-lunch drinks in the Victoria Bar and a delicious 3-course Lunch prepared and expertly served by the RAF Club staff, the President welcomed everyone to the gathering and noted the individual Chapters that were represented: one from the Meteor Chapter (Desmond Penrose); two from the Hawk, both previous Squadron Commanders; eight from the Buccaneer Chapter; two honorary members; and seven Hunter stalwarts celebrating the 50th Anniversary of the end of the Hunter era. He gave a special welcome to the largest Chapter represented which was, of course, the ladies, to whom he proposed a toast and a heartfelt vote of thanks for putting up with the various Association members for all these years. 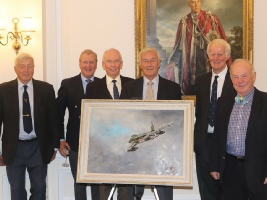 to the Hunter era, he recalled that, as a member of 8 Squadron, 208's sister Squadron in Bahrain, he had many fond memories of 208 Squadron in that period. Many of his 'chums' from this time were 208 Squadron members and he was particularly pleased to see Dave Stanley, John White, Nigel Champness, Gordon Reekie and Iain Ross, with whom he had served. The Hunter Boys were back in Town, and he thanked Iain Ross for whipping them all into this particular formation. He recounted many of the 'tales of derring do' of the 208 Squadron Hunter era, which he assured everyone were all truthful, and which had been faithfully reproduced in the bumper 2021 Edition of the Association Magazine, for which he gave fulsome and deserved credit to the Editor, Malcolm Ward.

Serving in the Hunter 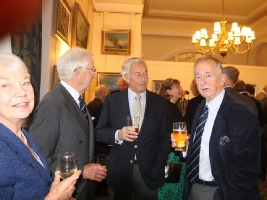 Wing had been a fantastic apprenticeship, brought home by the formation pictures in the Magazine, by the story of Mike Stear, the Association's former President, introducing skip bombing, which was a death-defying manoeuvre if ever there was one, and the celebrations of the 50th Anniversary of when the Squadron relinquished the Hunter. All of these stories had been brought back to life in the 2021 Magazine.

The President recalled that 208 and 8 Squadrons had been pretty close in Bahrain and, in terms of that relationship, he had a cross-over arrangement with a chap called Ian Brown. They decided that because they were always exchanging places in Masirah and Sharjah, they would share a car, the first of which had been a Borgward (a bit like a Swedish Volvo) that the President had bought. On the next rotation out of Sharjah, they acquired a Chevrolet from Las Vegas with those huge fins.