We set off from Bahrain with the last three 208 Squadron Hunters on my second UK ferry. With us we had our clapped-out T7, and as passenger we carried Sergeant Mick Rudge, an excellent technician and splendid character, hopefully to fix any en-route snags. Ferrying with the T7 could be a bit tricky. Its range was much less than that of the single-seaters, requiring extra stops en 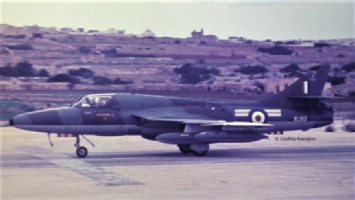 -route. First leg was direct Muharraq-Tehran, overflying Shiraz and Isfahan. Southern Iran was Moon country, the forbidding Zagros mountains forming gigantic razor-sharp ridgelines above 8,000 feet which extended for hundreds of miles to the north west. Iranian airspace was Indian Territory, the Air Traffic Controllers seeming to have little idea of what was going on.

Tehran International was a classic example, and we had to make our own arrangements for getting on the ground safely. We remained on the ground for the minimum time possible, just refuelling and getting out of there sharpish before the authorities had time to find something to complain about. On ferries with just a pair of aircraft we had an elaborate start-up ritual to follow to get both aircraft running successfully. One pilot would take the standard start-up kit of an asbestos glove and a hammer and start up the first aircraft with the other pilot in the cockpit. Then came the tricky bit. The pilot in the cockpit had to get out and start up the second aircraft, leaving his own engine running in an unmanned aircraft, (strictly against RAF regulations, but the only way we could do it: we couldn't risk having untrained ground crew cock it up). On this occasion we had the luxury of a trained groundcrew.

The takeoff from Teheran in the T7 was very sluggish and distinctly unpleasant: at one stage I was convinced we weren't going to get airborne before the end of the runway. The weather was crystal-clear as we climbed slowly into a brilliant vault of blue sky, the darker blue of the Caspian sea slowly materialising above the jagged peaks of the Elburz mountains in the north. There were precious few diversion airfields in this part of the world. After the huge expanse of Lake Urmia we were over Eastern Turkey, with ever-higher mountain ranges unfolding endlessly before us as I tuned in the evocatively-titled radio beacons of Van, Batman, Dyarbakir and Tatvan.

Because of the T7 we made a refuelling stop at Dyarbakir, a remote and primitive Turkish Air Force base in the mountains of Eastern Turkey. After the long trek from Bahrain we were already tired as we refuelled ready for departure to Cyprus: we had no intention of getting stuck there overnight.