This is an original watercolour commissioned for me in 1972 by my then girlfriend, now my wife, painted by Christine Marr, the Head of Art at the Middle School at RAF Laarbruch, Germany.

This was Christine's second foray into aviation art, her first one being a Buccaneer in the cloudy skies of Germany.  I was pleased with that painting, so when I decided I wanted something that captured the Hunter in the heat of the desert and the sandy-blue, humid skies of the Middle East, my girlfriend asked her to do another aircraft painting.

At the time Laarbruch had Canberras, Phantoms and Buccaneers, so she was used to seeing aircraft with canopies much larger than the Hunter's.  That explains why it has always rather looked to me as if there's a child flying it, although my wife says that this is nit-picking. 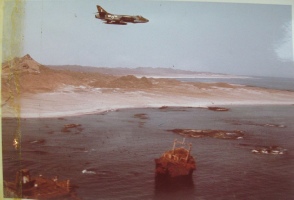 s might have other criticisms, but I think Christine has captured both the aircraft and the background very well, quite atmospheric.  It's unusual to have aircraft paintings in a loose watercolour, as the desire for precision often makes them look like photographs.

The painting was based on this photo taken in November 1970 by John Metcalfe, of me flying a 208 Squadron Hunter FGA9 over the wreck of the SS World Jury at the south end of Masirah Island, Oman. 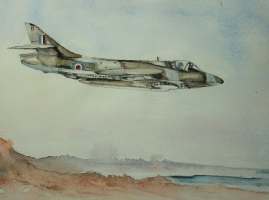