Tom Buckland died in Spain on 17 September 2018 after a long fight against prostate cancer.

He had his first tour on 208 Squadron in 1969-70, flying Hunters in the Gulf.  In those days it was only a 13-month tour, 6 months on the Squadron, one month back in the UK for leave and a Hunter simulator refresher, and 6 months back on the Squadron.  He was based at RAF Muharraq, Bahrain, and with 8 Squadron's

Hunters was there for deterrence: to deter Iraq from its ever-present

claim against Kuwait; to deter Iran from its ever-present claim against Bahrain, Qatar, and parts of what are now the United Arab Emirates and the Kingdom of Oman; to deter possibly dissident tribesmen in Oman and reassure loyal ones; and perhaps to make Saudi Arabia think twice about again having a border dispute with the UAE.

The rank and experience structure amongst the 15 pilots on 208

when Tom arrived was unusual.  The boss was a squadron leader, Taff Taylor, there was one flight lieutenant flight commander, Dave Young, and one flight lieutenant QFI/IRE, Pete Millard.  The other 12 pilots were flying officers, including the PAI, Paul Day, and these 4 were the only ones who

weren't first tourists.  So, with 11 first-tourists out of 15 pilots at the start of Tom's tour, we were a very inexperienced lot.

That didn't stop Tom and the rest of us from making the most of all that flying Hunters in the Gulf had to offer.  Monday to Friday was a 7.00am start, flying until 1.00pm, with ground training on Saturda 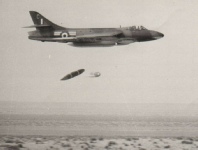 y morning.  We had no offensive weapons in Bahrain, so when we were there we spent our time in the day fighter role, or in the ground-attack role doing simulated attacks against targets in the UAE.  The fighter training was occasionally doing intercepts or cine weave, but mostly practising our air combat, from 1 v 1 to 4 v 2.

We went on frequent APCs to Sharjah and Masirah to put into practice the air-to-ground part of our DFGA role, and these included dry FAC from Sharjah, and live FAC at Masirah with 68mm rockets, 30mm cannon, and simulated napalm.  Going to Masirah involved low-level flying through the mountains of Oman, showing the flag to those who needed reminding of the presence of the air power available to the Sultan's friends.  Great fun all round, authorized to fly at 50 feet, and in mostly perfect weather, a young pilot's dream.