Gibraltar - The Rock That Rocks 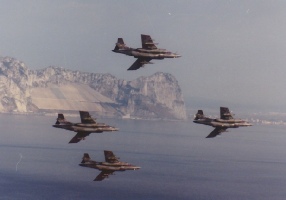 mile, mainly limestone verruca on the foot of Spain has been a pain in our European neighbour’s backside since 1704 and, more recently, our respective flight commanders’. My own ‘love’ of Gibraltar began in 1988 when as a very recent arrival from (or should I say survivor of) 237 OCU, I noticed that there was a sign-up sheet for OTFs (overseas training flights) and there was a spare slot as a pilot for a weekend airshow in Gibraltar. I found this most peculiar and was somewhat cautious of tricks being played on the newbees. Many of you will remember being told that there was an upcoming detachment to Santa Megwan, rushing to check in an atlas (well it was pre-google days) which exotic location in France this might be near to, only to find that it was actually St Mawgan, close to Newquay and you weren’t going to need to go to the travel agent for currency after all.

Anyway, I digress: working on the old adage “if you don’t ask you don’t get”, I asked if I could go. To my eternal surprise the then OC B Flt, none other than ‘yo shiddy’ Sqn Ldr Tony Lunnon-Wood or TLW for short, seemed supportive of the idea. So, despite only being on the Sqn for 2 months and 4 days, I was told to go pack my bag, I was off to Gib. I did have to go and look at the atlas again just to make sure it was where I 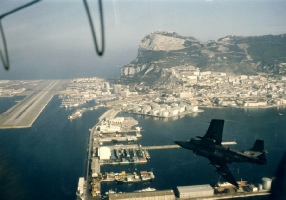 thought it was. Unusually for a transit to Gib we actually planned to stop and refuel which was a blessing as I hadn’t started my tanker conversion. Flt Lt Keith ‘Bunter’ Nugent had the dubious honour of sitting in the back seat of XV895 while we passed through RNAS Yeovilton before taking on the joys of the 10 West transit to stay outside of Spanish airspace (they never really liked us even before Brexit).

Although extensively briefed on the ground, as we started the descent, both TLW and Bunter reminded me of the special features the Rock possesses: 5830ft of runway (according to latest ICAO data) which gets very wet at both ends (as both Flt Lts John, ‘JP’ aka Crap Pilot, Parker and Mal aka Mal Miller both almost found out in subsequent detachments (but that’s for later maybe)). Oh and, by the way, don’t forget those swirling winds as a result of the world’s largest hangar and the effect that can have on your approach. So not nervous at all then. After a quick wizz around the rock to have a look see we came in for the approach. I honestly can’t remember whether it was to 09 where you had to pick your way through the masts of all the gin palaces anchored off Biancas or the slightly easier approach to 27, either way making sure you stayed inside the buoys