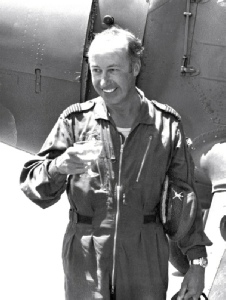 who has died aged 88, had a wide variety of appointments as a Cold War fighter pilot and during his service overseas he saw action in Oman and during the Indonesian Confrontation. He went on to work in the export aircraft industry. The son of an iron foundry worker and an Oxford college cook, Leslie William Phipps was born in Oxford on April 17, 1930. He left St James School when he was fourteen and worked in the council offices in Oxford. He joined the Air Training Corps where he gained his gliding certificate and on being called up for National Service in 1948 he was selected for training as a pilot.

In June 1951 he joined his first jet fighter squadron and flew the Meteor with 19 Squadron before being trained as a pilot attack instructor when he also performed as a solo aerobatic display pilot. In 1956 he served in command of the RAF detachment at Aqaba in Jordan during the Suez crisis. He remained in the Middle East for three years, first flying Meteors in the fighter reconnaissance role with 208 Squadron based in Malta before joining 8 Squadron at Khormaksar in Aden where he flew Venoms in the fighter ground attack role. During a deployment to Sharjah in the Persian Gulf he saw action during the Battle of Jebel Akhdar when the mountainous strongholds of the rebels supporting an uprising were attacked with bombs and rockets.

Phipps’ return to the UK saw him converting to the Hunter before taking command of 19 Squadron, his leadership and efficiency being recognised by the award of the AFC. His above average assessment as a fighter pilot saw him posted to the Central Fighter Establishment where he developed tactics and trials with the Air Fighting Development Unit and the Day Fighter Combat School. After attending the Royal Naval Staff College at Greenwich, he widened his joint services experience when he became wing commander operations at HQ 1 (British) Corps based in Germany. He did not allow this ground appointment to prevent him keeping in flying practice and, whenever possible, he flew Hunter fighter reconnaissance sorties with the squadrons based at nearby Gutersloh.

In 1966 he headed for the Far East to command the RAF airfield at Labuan in Borneo during the final phases of the Confrontation with Indonesia. A wide variety of aircraft and helicopters were detached to the base and he took every opportunity to fly them.