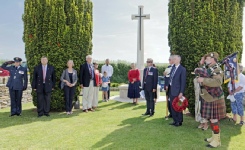 David T-Ryder, laid a wreath at a ceremony of remembrance on 27 May 2018, exactly 100 years to day that Flight Commander Robert Little, DSO & Bar, DSC & Bar, Croix de Guerre, died from his wounds.

Robert Little was from Melbourne, Australia and is known as Australia’s greatest fighter ace. He was one of seven Australian Pilots who served in the Royal Naval Air Service (notably on Naval 8) and was involved in bombing raids at Dunkirk and fighting German aircraft during the 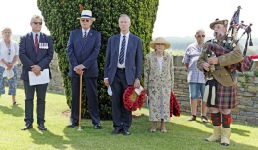 1917 Arras offensive. In all he achieved 47 confirmed victories and in recognition was awarded the DSO & Bar, DSC & Bar and the French Croix de Guerre.

Robert Little’s meteoric career ended on 27 May 1918. He had received reports of German Gotha bombers in the area, and took off on a moonlit evening to intercept the raiders. As he closed with one of the bombers, his aircraft was caught in a searchlight beam and he was struck by a bullet that passed through both his 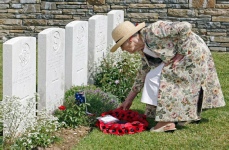 thighs. He crash-landed in a field near Noeux-lès-Auxi and bled to death before he was discovered the following morning by a passing gendarme.  Robert Little was aged just 22 when he was killed.

The photographs are courtesy of Bernard Grimaud at this link: 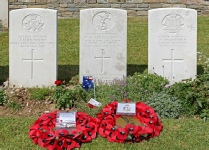 Cemetery is north-west of the village on the road running north towards Auxi-le-Château (D938). The village is signposted as: Beauvoir-Wavans.

Wavans British Cemetery was made by the 21st Casualty Clearing Station in May-September 1918.
There are now over 40, 1914-18 war casualties commemorated in this site. The cemetery covers an area of 265 square metres and is enclosed by a stone rubble wall. Many of those buried in the cemetery are from the Flying Services.

More information about the Wavans British Cemetery can be found at this link:

Back to News
Archive