I arrived in Muharraq 50 years ago (!) on the once-a-week Thursday VC10, ‘Moon rocket’, named thus because it delivered newly arrived ‘Moonies’ (referring to the colour of their knees). On the aircraft with me were Sqn Ldr Bill Stoker, the new CO of No. 8 Sqn, Bob Iveson who was also going to 8, and Derek North and Roger Hyde to join 208. We were the last to complete a Day Fighter Ground Attack course at Chivenor on the Hunter and as my surname began with a W, I have always considered myself the last first tourist to go to a front line Hunter squadron!

We were met from the aircraft by John Barrow, an old mate, and whisked off to the bar where it was traditional to be introduced to the senior leadership of the squadron. The following day we discovered that amongst others, the scruffy ‘junior’ officer who was a bit worse for wear in the corner the previous evening, was actually the Boss, and the ‘Boss’ was actually the Ground Liaison officer etc etc. I’m not quite sure why, I suppose because of the inevitable delays to the introduction of the Harrier and the F4, but the RAF were not short of pilots coming out of training at the time and as a result we were quite a large squadron with 22 pilots and 12 Hunter FGA9s (plus the odd 2 seat T7). 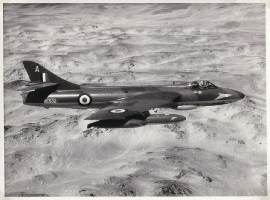 and PAI, could be accompanied, and only then if they were over 25, as we were not meant to get married younger than that and there was no support for having other wives in theatre. We were a pretty happy bunch, who wouldn’t be, with a great aircraft and fantastic flying. But there was a bit of a rift I seem to remember between us (very) junior pilots and the squadron hierarchy, probably because there were too many of us.

208 had a well-deserved reputation for aircraft serviceability, which was the envy of our colleagues on our sister squadron (No. 8) on the base. Typically for units in the Middle East, we had an early start each morning. We normally achieved two waves of flying each day and then stood down to the Mess in the early afternoon when it became too hot. Then it was a few refreshing cold beers before covering ourselves in sun tan oil and going to lie in the sun by the officers’ pool for a couple of hours.  Thereafter, the normal routine was to kip for an hour perhaps and then meet up in the bar before dinner. There was little else to do and John Barrow and I spent many an evening playing snooker. The meals were OK, but there was obviously not a lot of fresh food, even the eggs were injected with some sort of preservative. I seem to remember that I lived on a diet consisting mainly of locally caught prawns.

Early on in the tour, most of my flying seemed to focus on high level battle formation which I found quite taxing, operating towards the edge of the aircraft’s flight envelope.