Not long after I joined 208 Sqn in Aden as the Engineering Officer, I had the temerity to tell the Hunter Wg Cdr that I could find nothing wrong with the weapons system of the 208 Sqn 2-seat Hunter, having ground tested it and found it serviceable. As he had previously got airborne with the Khormaksar Stn Cdr, where neither guns nor rockets fired, he was not impressed with my statement, and having noticed that I was wearing wings, retorted: “Get your kit on, and we’ll see about that.” So, I flew my first sortie in a Hunter on 27 January 1964 on a gun and rocket training sortie. We taxied out quite normally, but I was surprised when the Wg Cdr pulled out a pair of glasses and put them on. Once airborne, he informed me that he wasn’t going to waste range time and was going to try to fire a rocket out to sea. He did the checks 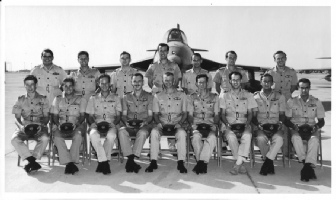 and “whoosh” a 3 inch concrete-headed rocket disappeared out to sea. We duly turned and went to the range, fired the rest of the rockets, and emptied the Aden gun. Having only flown flying training aircraft and Canberras, I thought we got awfully close to the ground during these ground attack dives.

Having reversed the previous engineer’s policy of robbing the T7 to keep the single seat FGA 9s supplied with spares, I managed to get some 10 hours flying in the T7 from January to May. In the middle of 1964, 208 Sqn was relocated to Bahrain. By now I had flown with the Sqn Cdr, both Flt Cdrs, and both Qualified Flying Instructors (QFIs) on the Sqn, and after a dual check by one of the Flt Cdrs, I was sent solo on 12 October 1964. After more flying with all the senior pilots on the sqn, I started to give the sqn technicians air experience flights when I got airborne with Sgt Taylor on 3 Feb 1965.

In March 1965, I had my one and only sortie in the Hunter single-seat FGA 9. I flew for 45 minutes, apparently checking that the ailerons worked correctly. I gave air experience to a total of 15 sqn technicians, 3 army officers, and 2 non-sqn RAF officers during the rest of 1965. Sometime during the year, the Sqn Cdr decided that as I was flying so regularly, I would have to take the Hunter Simulator and Emergency (HSE) Course, so in July 1965, I arrived at RAF Chivenor in Devon. It caused much consternation as I had never passed through their clutches, and how could I be a Hunter pilot if I hadn’t been through their conversion course? It proved to be horrendous for me, cooped up in the dark of a simulator. The Sqn had only allowed me to fly in clear blue sky, and NEVER at night. However, I didn’t crash but I certainly went up and down at unusual intervals. My log book shows that between the 5th and 9th July 1965, I flew nine 1 hour simulator sorties, and carried out 2 successful ejections.