On Saturday 26 October 2002, pilots of 208 Squadron were privileged to take part in a 4-squadron flypast of Perth to celebrate the 60th Anniversary of the Battle of El-Alamein, thus linking the exploits of the Squadron of the past with the training task of the present.  At the time, there were only 4 RAF squadrons still flying that had served in the battles of El-Alamein and, because of the age of the veterans of the El-Alamein Battle, this was the last formal organised anniversary parade that was ever to be held.

Launching out of RAF Leuchars, a 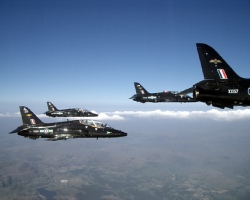 This was also the day of the 2002 Association Reunion at the Royal Air Force Club so, following the flypasts, in one of the longest Hawk sorties ever flown (1:40) Wing Commander Neil Meadows, who had led the 208 Squadron 4-ship element of the flypast, broke from the formation and flew down to RAF Lyneham in Wiltshire and then onwards by train to London and the Club. There he was also honoured to meet 2 former members of the Squadron who had served at the time of the Battle of El-Alamein.

At that same Reunion Dinner in October 2002, an outstanding display season by Flight Lieutenant Rich Hillard earned him the coveted Bromet Trophy and a C-in-C’s Commendation for excellence in the air.