Our American friends in the village might find this tale amusing. It is true and relates to a retired US Air Force Colonel friend of mine who has a passion for restoring and flying vintage aircraft. His latest project was to make a WW1 Sopwith Camel air-worthy. This he did. Taking it out for a flight on 4th July 2011, he flew 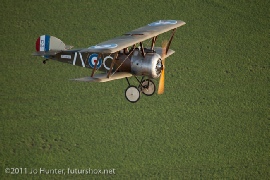 over his local town just as an Independence Day parade was in full swing. I reproduce here his post-flight account of events that followed. The words are my friend’s but the names of people and places have been withheld for reasons of propriety.

“After clearing my previous in-flight emergency of a bug inside my goggles, the Sopwith and I again wafted into the South Texas morning. As in many small American towns, the town has a local Independence Day Parade, complete with local floats and town celebrities. I overflew and did a brief circle over town square at a safe altitude, and could see it was jam packed, but could not make out any details. Very nice I thought, and putted back over to the airport and orbited a bit playing with power, then landed uneventfully. As I was putting the plane in the hangar, several cars drove up and I was eagerly greeted by airport friends.

"Everybody saw you and you certainly affected the parade!"

It seems, in the middle of the parade, there was a marching "formation" of retired military of all services and Junior ROTC, "led" by the retired Air Force Colonel pilot (every small town has one). As the Camel passed over, all of the military looked up and could not believe a WW1 aircraft was passing over head; not the least mesmerized was the Colonel, recognizing the Sopwith and not knowing there was one in town. He became so focused on watching the plane that 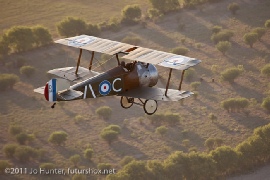 he missed his turn and led the formation, and the parade, down the wrong street, still gazing upward at the British fighter.

Luckily, some of the other folks got them back on the correct route, and everyone had a good chuckle, and the day was saved. Yes, in a small way, the English unintentionally got a lick in today on American Independence Day.”

This is a photograph of the actual Camel and its pilot mentioned in the story.