The Association is indebted to Garrett Cuzner, great-great-nephew of Albert Cuzner, for correcting the above letter concerning the fate of his grandfather, John Garrett Cuzner. He writes:

I have been doing some family research and I came across information on Albert Edward Cuzner. I would like to provide you with correct information regarding Albert's family (which is incorrectly noted in a typed letter on your website). Perhaps these corrections would be of help to others who are doing ancestry research.

I thank-you and those who contribute to informing people about those who gave their lives for freedom. I have read with interest the information about Albert Cuzner as I had heard stories about him in my youth. 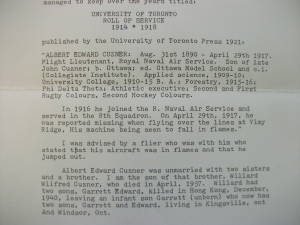