The RAF News often reports on sons flying with their fathers, but it is rare for a daughter to do so. However, in mid-June, Flight Lieutenant Kirsty Stewart was able to take Squadron Leader Robbie Stewart on a navigation sortie through Devon, Cornwall and South Wales in one of 208 Squadron’s Hawk aircraft.

Kirsty was just 13 years old when her father was shot down in the Gulf War in January 1991. Fortunately, he returned safely to the UK in mid-March, when he was posted to the Tri-National Tornado Training Establishment at RAF Cottesmore. He remained there until 1997, when he moved to No 55 Squadron at the RAF College Cranwell, where he is now a Flight Commander teaching elementary navigation.

Undeterred by her father’s wartime experiences, 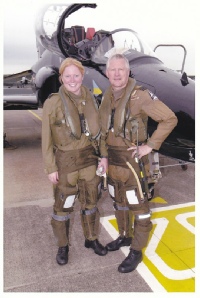 Kirsty realised her ambition of joining the RAF ‘family’ when she was awarded a University Cadetship to read Aeronautical Engineering at Imperial College, London in l998. As a trainee pilot with the University of London Air Squadron, she gained some 100 hours flying the Bulldog before completing Initial Officer Training, Basic Fast Jet Training and, ultimately, Advanced Flying Training at RAF Valley in November 2001. Her achievements did not stop there as, following the award of her ‘wings’, she was selected on merit to become the RAF’s first ever female fast-jet 1st-tourist (creamie) instructor (and 208 Squadron’s first ever female staff pilot to boot!).

Once Kirsty began flying training, it was always her father’s ambition to be able to fly with his daughter. Pictured here are Kirsty and her father alongside the 208 Squadron Hawk in which they flew their mixed-profile navigation sortie.

Kirsty has now been a QFI on 208 Squadron for 7 months and will soon undertake her recategorisation to ‘B1’.  Although she enjoys flying solo, she was heard to say that having her dad in the back did make life easier - but she would never, of course, say that to his face. For his part, Squadron Leader Stewart enjoyed being back in the cockpit of a fast jet, and they both maintain that the 2 targets on the route were successfully hit! 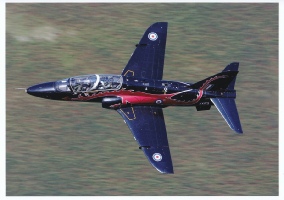 -yr instructional tour, Kirsty will continue with her flying training on 19(F) Squadron at RAF Valley before advancing to a combat squadron, hopefully following her father’s footsteps in the ground attack role.

Left,, Kirsty in the rear seat of XX172 the ‘Red Dragon’ during a recent low flying sortie in North Wales.

Back to Hawk Articles