The Hawk Fleet has set a new record for Valley by flying an astonishing 146 sorties in a single day. No 208(R) Squadron led the effort by flying 100 of the sorties with the rest being flown by 19(R) Squadron. It is believed to be a unique achievement: "Although the archive material does not lend itself to easy comparisons, nobody is aware of a 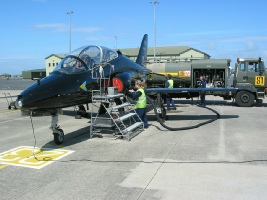 squadron flying as many sorties in a single day," said Sebastian Cox, Head of the Air Historical Branch.

The sorties needed a huge amount of planning, investment and effort in a Project named 'Target 160'. The Project established that to deliver the right number of fast-jet pilots to the Operational Conversion Units and then to the front line, No 4 Flying Training School would have to plan a maximum of 160 sorties on days when weather allowed, with the aim of achieving around 143.

With detailed planning at Valley and the Training Group Defence Agency, along with support from Valley's contractors, post-sortie aircraft turn round times have been slashed from one hour to less than 30 minutes to allow more use of the aircraft during the flying day. This has required a flexible refuel support concept to ensure that there are no delays in preparing the aircraft for the next sortie and approximately 100 extra civilian maintenance jobs have been created. More administration and operations support posts have also been created to make sure flying instructors are 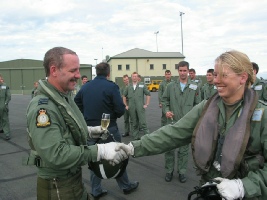 not diverted from their primary training tasks.

The 99th and 100th sorties of the record day were a formation flown by Flt Lt Mitch Pymm and Wg Cdr Neil Meadows, 208 Squadron's Commanding Officer. "This achievement is a testament to the effort that everyone at RAF Valley has put in to improve the way we deliver our student output" said Wg Cdr Meadows. "This has proved beyond doubt that Valley is able to achieve its training task to meet the front-line future need. The job now remains to transform this extraordinary achievement to an ordinary day-to-day event, although the goal will be to plan a steady 84 sorties 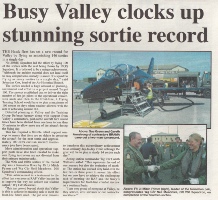 Acting Station Commander Wg Cdr Gareth Williams added: "This represents the end of one journey but also the beginning of another. The Station has worked very hard over the last two or three years to mount tis effort, but we now have to achieve the challenging task of meeting the RAF's and the Navy's requirement for front-line combat aircrew on a continual basis. I am very proud of everyone at Valley, be they service, civil servants or our contractor workforce."

Click on the picture to read the RAF News article published on 8 Aug 2003.

Back to News
Archive

Back to Hawk Articles