The after dinner story about Exercise Nile 90 (2018 Newsletter) has provoked a memory of our dealings and cooperation with the Egyptian Air Force.

I joined 208 at Abu Sueir in January 1955 as a first tourist on Meteors FR9. At that time the Egyptian Air Force was re-equipping with its first jet aircraft, Meteor NF11 and Vampire and was working up at Deversoir, an airfield on the Bitter Lakes. The boss got an order from AHQ(ME) to send our PAI, Chris Bushe (Pee Wee) to help with the gunnery practice whilst we 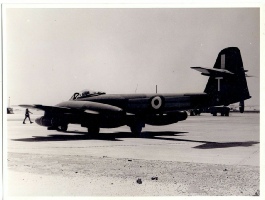 were to provide air-to-air banner towing.

In early October the programme began, Pee Wee went to Deversoir by car each morning and on our scheduled programme we got airborne with the banner and made our way to the range over Sinai where we would meet up with the Vampires. I did two or three of these sorties and apart from the difficulty in meeting up all went well.

Pee Wee used to come back in the late afternoon and give us a rundown on the Egyptians’ performance and we presented any "bitches" we had, but generally all was reasonably OK. One afternoon, Pee Wee returned and informed us that one of the Egyptian pilots had stood up at the morning briefing and proudly announced that he had the problem beaten: the answer was to fire from line astern. The live firing was cancelled!!

Pee Wee established a good relationship with the Egyptians and in chatting with them he asked them whether it would be advantageous to both air forces if we could "bounce" them if we met in the air. They agreed. Later Pee Wee was leading a section of four Meteors over the Nile delta: they spotted a section of three NF11 Meteors and bounced them, causing havoc to the NFs. On landing, Pee Wee was called into see the Boss. The Meteors were being flown by very senior Egptian officers who thought that another war had broken out!! A few days later we saw Pee Wee in his best bib and tucker climb into a car for "coffee with the AOC."