After graduating from RAF Cranwell's 89 Entry, Derek instructed on Jet Provosts at RAF Leeming from 1967.

From 1970-71 he was on 208 Squadron at RAF Muharraq flying Hunters, and he continued on Hunters, instructing on the Hunter OCU/Tactical Weapons Unit.

He then went onto the Lightning Force and spent his remaining flying years with them at Gutersloh and Binbrook, apart from a 4-year exchange tour at GAF Jever on the F-104.

Thereafter he was heavily involved with the Typhoon from its inception and ended up with 3 years in Munich.  Derek left the Service early as a group captain at the behest of Racal.

The family ended up near Worth in West Sussex; he was appointed Deputy Lieutenant for West Sussex in 2012.

Click on his photograph below to read the Order of Service from Derek’s funeral on 28 October 2020. 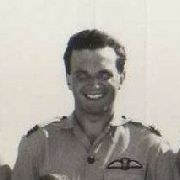