Memory may be a bit lacking these days as the following incident took place in 1968 or thereabouts. Some of my facts may be a tad out but the gist is true and correct! Graham Thomson and I - first tourists and a little green around the edges - were tasked as No. 2 and No. 4 on a 4-ship to Sharjah from Muharraq. Take off was planned for '0 dark 30' on the morning in question, so Graham and I thought we'd have one quick drink the night before and get our heads down. OK, we perhaps lingered a little too long in the bar but there were some very important world affairs that needed sorting out. I awoke next morning with 10 mins to briefing. Graham, 2 doors down in the bachelor block was still dreaming of I know not what. I shook him awake, 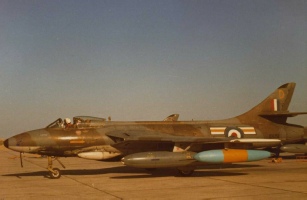 we dived into our flying suits, jumped on our Honda 50cc bikes (no expense spared in those days) and rushed to briefing in the Sqn, 15 mins late. A definite no-no and we were left in no doubt that a severe bollocking and appropriate punishment would ensue when we got to Sharjah.

Pairs take-offs went off reasonably well, even in the dark, and it was with some relief that the sun came up and we could relax from close into battle formation for the low-level trip to Sharjah. I wondered en-route what punishment would ensue for our misdemeanour. Banned from the bar? (not for the first time), interview with the Boss? Maybe, in the worst case, sent home? (it was not unknown in those days!).  I heard our leader call for a 4-ship battle break with RAF Sharjah tower. "Roger" replied the tower "No visual yet." Lead called again: "Red formation at 2 miles." "Roger" replied the tower "Still no visual, check your position." There was a long pause and a large 'thinks bubble' appeared over Red lead's Hunter. I then heard "Red formation 90 degrees port go!" We had in fact lined up on Dubai International, about 12 miles south of RAF Sharjah. 10 mins later we were in the crew room for the debrief - it was rather short and no mention was made about Graham and I being late!