Recalling a Trip to Cyprus

In the spring of 1958, 208(F) Squadron, newly-equipped with Hunter F Mk 6s, left RAF Tangmere to start a tour of duty in Cyprus. In the spring of 2008, eight members of the 208 Squadron (Cyprus) Association together with wives, widows, sons and friends made a return visit to celebrate the 50th Anniversary of our arrival in Cyprus.

The reunion proper was over a 4-day weekend, although our stay on Cyprus was for a week. The flights, hotel, all meals and booze were organised by Ron Howland. Our tour operator was Saga.

On the Friday, Terry Gibson organised a coach trip into Turkish Cyprus to visit Kyrenia, our old stomping ground in the north. We passed by our main base at RAF Nicosia, now a UN base, I think. We were very surprised to see a large '208' painted on a watchtower; lots of clicking cameras. The harbour area at Kyrenia was very much as I remembered it 50 years ago, but instead of a sleepy old fishing village it is now a bustling tourist trap. And the old NAAFI R&R hotel, which I remember having sandbag defences, is now a casino.

Saturday and Sunday were 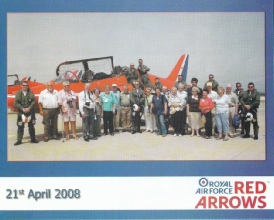 spent relaxing in the sun prior to two reunion dinners with subsequent partying afterwards. With all of us now in our 70s, I was surprised at our stamina.

Before leaving for Cyprus, I had been in touch with the Red Arrows, who I knew would arrive at RAF Akrotiri only 3 days prior to our already-arranged Akrotiri visit. Just before we left, I had an email from the Arrows saying that they would be delighted to host the 208 Squadron Association. I hurriedly contacted RAFA at Akrotiri and they very obligingly rescheduled our visit to include the Arrows programme. The day finally arrived and, after clearing security, we had a tour of the base, which included a visit to the station museum and then we were driven to the Arrows dispersal. We sat in on the next practice sortie briefing, then watched them taxy out and take off. We were hurried into 4x4 vehicles and rushed up to the Cape Gata cliff top, where the Arrows did a practice display using our location as a datum. It may have been a routine practice for them, but it felt as if the display was laid on exclusively for us. It was fantastic. Then it was back to the dispersal for photos with the pilots and aircraft before we had to leave. Wow! What a day, what a trip!

This article first appeared in the 2008 Newsletter.

Recalling a Trip to Cyprus