I arrived on 208 at Muharraq in Dec 1967, on a typically stiflingly hot and humid Bahrain evening, despite the time of year. Keen to make a good first impression on this my first squadron, I was dressed in a three-piece wool suit and was met off the aircraft by Jim Uprichard, one of the Squadron pilots.   How hospitable, I thought, what a friendly welcome.

"No time to change" said Jim, "the Boss is waiting to meet you in the bar."

A pity about the suit, I don't know who said wool was cool, but what a great squadron, I thought.

The Boss (Mike Shaw) introduced me to the Squadron drunk (Tony Chaplin), the Padre (Dai Heather Hays) and various other personalities, who proceeded to take advantage of my naivety. It was not until I saw the ‘Padre’ throwing up in the unlit fireplace that the penny dropped! Mike was one of the junior pilots, Dai was a JP from 8 Squadron our sister Squadron and Tony the 'drunk' was the actual Boss. The rest of my tour continued in this high-spirited way, and I could not have wished for a more exciting, fun and professional introduction to life as a fighter pilot. 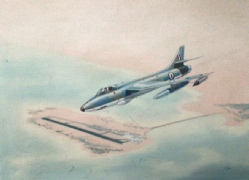 was doing a sales pitch for his aviation artwork at Coningsby. By then I was on 54 Squadron flying F-4s and I asked him to do me a painting of a 208 Hunter over Muharraq. This is the result.

Chris Golds is a renowned aviation artist and was a good choice to paint the Hunter: he served as a fighter pilot from 1954 to 1971 and commanded 79 Squadron, flying Hunters from Chivenor from 1969 to 1971. His art is displayed in the Barnstaple Civic Centre, the Defence Academy Shrivenham, and the Fleet Air Arm Museum Yeovilton.